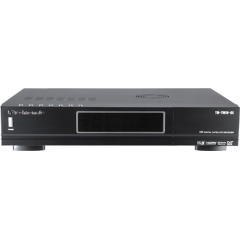 FREE DELIVERY ON THIS ITEM*

The original receiver that the Enigma2 version of the BBC iPlayer was developed on.

With Technomate’s flagship twin tuner satellite receiver, the TM-Twin, you can watch satellite channels in glorious High-Definition (HD), Full HD 1080p with Dolby Digital Plus to give you a superior audio experience. It’s also 3D ready*. Not content with standard components, the TM-Twin's components are all high-grade, high-quality to deliver you the best performing satellite receiver.

You can use a USB Hard Disk Drive (HDD) or an internal 3.5" Hard Disk Drive to record all your favourite channels, listen to your music and watch a slideshow of your photos.

To watch the same channel on another TV, there’s an RF modulator at the rear of the satellite receiver, so you can watch all your channels in your bedroom (requires a cable to be connected from the RF modulator to the second TV).

The silent temperature and speed controlled fan cools the TM-Twin only when needed and the speed level can also be adjusted.

*not all 3D formats are compatible & requires a 3D TV

*not all 3D formats are compatible & requires a 3D TV. FREE HDD OFFER!! HDD is a reclaimed unit, specifically made for PVR use, make and model may vary, and will be a minimum of 300Gb capacity (preformatted). HDD will be formatted on our test TM-TWIN receiver and tested prior to dispatch, and will follow in a seperate package. HDD is for self install. HDD comes with 90 day swap out warranty. No cash alternative is available. Free HDD units available while stocks last. Stock will show as unavailable once depleted. This offer may be removed without notice.


Your Review: Note: HTML is not translated!

Enter the code in the box below: